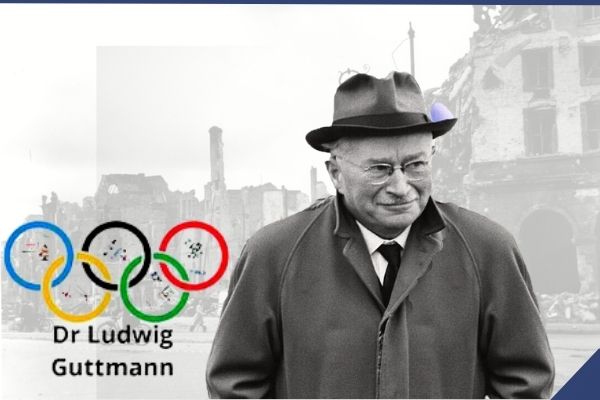 Dr. Ludwig Guttman, the Father of the Paralympics

Sir Ludwig Guttmann is regarded as the founding father of the Paralympic movement; he was the medical pioneer who demonstrated that impaired sport could be as competitive and thrilling as a non-disabled sport. He gained command of the National Spinal Injuries Unit at Stoke Mandeville in September 1943.

By incorporating rehabilitation via athletics, Dr. Ludwig Guttman incorporated his own views on how to effectively treat paraplegic individuals. National events followed, followed by the International Stoke Mandeville Games, and eventually the Paralympic Games.

As the Nazis were dictatoring the country, they ordered that any Jew practicing medicine would not be practicing medicine. It was a major setback for Guttman. But Dr. Ludwig Guttman still kept running his hospital and made a rule to not ask the patients about their races, going against the racial laws.

This decision came with consequences, as his passport was confiscated and he was banned from traveling anywhere. But destiny was playing its role and he was asked to go to Portugal to treat Portugal’s dictator’s a friend. While he was returning, he stopped in London for two days, and then never took off for Germany. He had already contacted the officials in London to protect him and his family.

After emigrating with his wife and children to England, they went to Oxford, and Dr. Ludwig Guttman started working at an infirmary and a hospital to treat the wounded. Observing his work in head and spinal injuries, the government of Britain decided to start a National Spinal Injuries Centre at Stoke Mandeville hospital.

Dr. Ludwig Guttman believed that these kinds of injuries can be treated or the condition of the patient could become better through some physical exercise.

The most important aspect of the treatment of disabilities relies on the mindset of patients. They have to maintain the hope of getting themselves treated and going back to the world to live their lives in a normal way. Many patients, after suffering from horrific tragedies, cannot maintain this hope, So Dr. Ludwig was a key factor in instilling this confidence and hope in them.

Dr. Ludwig Guttman set up many workshops to indulge the patients in day-to-day as well as some laborious activities like woodwork or clock and watch repair shops. But the patients liked the idea of playing sports the most.

Seeing the patients’ interest in sports, Ludwig started setting up more workshops on sports, which included archery and wheelchair basketball. He finally took this game to a bigger level by starting the Stoke Mandeville Games in 1948, where archery was the first sport to be played by Paralympians.

The transformation of the Stoke Mandeville Games into Paralympic Games (Olympics)

The Stoke Mandeville Games soon became famous among the disabled people, and they worked as a ray of hope for them. They started to attend the games in large numbers, and patients from various hospitals started training for and participating in them. The numbers were rapidly increasing. Over 140 international competitors competed in the fourth Stoke Mandeville game.

The 9th Mandeville Games took place in Rome and are considered the first Paralympic Games conducted under the supervision of the IOC (International Olympics Committee).

Dr. Ludwig Guttman was awarded the Sir Thomas Fearnley Cup in 1956 for his achievements in the field of spinal injuries and his contribution to the start of the Paralympic Games.

Dr. Ludwig’s whole life had revolved around the patients, and this had created love towards them. Even after his retirement, he used to roam around the world and conduct seminars and camps to help people with disabilities. He wanted to impart his knowledge in this field to every individual who was suffering from the disease and had lost all hope.

Dr. Ludwig Guttman died of heart failure on March 18, 1980, just months after suffering a heart attack. His work lives on via modern disability sports organizations and the National Spinal Injuries Centre at Stoke Mandeville, which continues to be a world leader in spinal injury treatment.